* In the early 1960s, the Boeing company followed up its ground-breaking 707 jetliner with a smaller aircraft, the "727", which would prove even more popular than its predecessor. This document provides a history and description of the Boeing 727. A list of illustration credits is included at the end.

* In 1956 the Boeing company, having achieved commercial success with the 707 jetliner, decided to focus on a new jetliner that could operate out of smaller airports and service the short to medium range market. Design considerations led to the selection of three engines for the aircraft, partly for safety through redundancy; partly because no two of the powerplants available at the time could get an aircraft of the desired size into the air.

Another source of nerves was that while Eastern and United Airlines were interested in the new jetliner, predelivery orders didn't pour in at a satisfactory rate -- but the decision was made in 1960 to proceed with development anyway. The first "727" trijet was rolled out in November 1962, with initial flight on 9 February 1963, the aircrew being pilot Lew Wallick, copilot Dix Loesch, and flight engineer M.K. Shulenberger. The aircrew was impressed, but getting the 727 out the door would prove more expensive than anticipated. Difficulties were resolved, and the initial production "727-100" was certified in late 1963, with Boeing then selling 727s as fast as they could be built.

* The 727 was a sleek aircraft, and in the early 1960s it appeared futuristic, a space-age machine like something out of THE JETSONS. The 727-100 was built mostly of aircraft aluminum alloy. It was powered by three Pratt & Whitney (PW) JT8D turbofans, one mounted on each side of the tail while the third was mounted in the tail, the intake being at the base of the tailfin. Each engine had a clamshell thrust reverser.

The initial engine fit was the JT8D-1, with 62.3 kN (6,350 kgp / 14,000 lbf) thrust; later the JT8D-7 -- with the same thrust, but capable of maintaining power at higher ambient temperatures -- and ultimately the JT8D-9 -- with 64.5 kN (6,575 kgp / 14,500 lbf) thrust -- were offered as options. All fuel stowage was in the wings. The 727 had an AirResearch GTC85 auxiliary power unit (APU) turbine engine, something of an innovation at the time though a standard concept these days, to provide engine starting and ground power. The APU was placed in the wing center section.

All flight surfaces were swept, with a low-mounted wing and a tee tail. The two-spar wing had a sweep at quarter-chord of 32 degrees, with a dihedral of 3 degrees and an angle of incidence of 2 degrees. The wing control surface arrangement was unusually "busy", mostly to improve short-field capability. Each wing featured:

The 727 had tricycle landing gear, all gear assemblies featuring twin wheels. The nose gear retracted forward, while the main gear hinged from the wings in toward the fuselage. Maximum passenger capacity was 129 seats, but that was a "cattle car" configuration; a more reasonable single-class configuration was about 110 seats, while a typical two-class configuration was 24 first class and 72 economy class seats. There was a passenger door on the front left fuselage with a fold-out "airstair", though the airstair may have been optional; a service door ahead of the wing on the right of the fuselage; twin emergency exits over each wing; and, unconventionally, a drop-down airstair door under the tail. 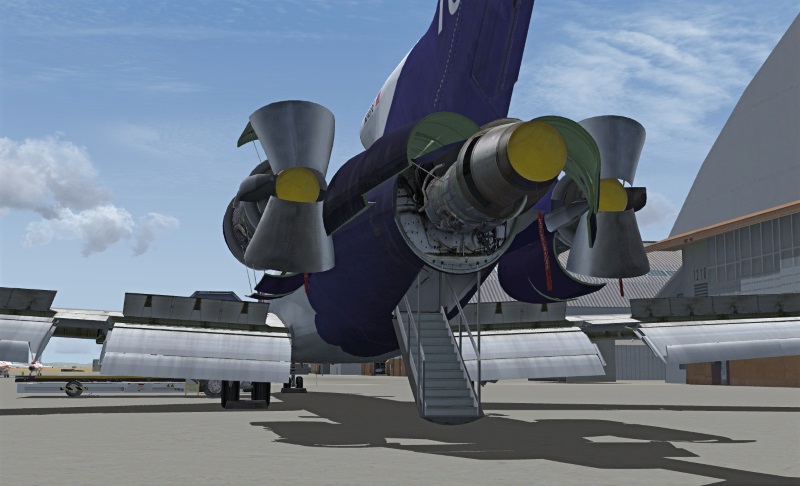 A convertible passenger-cargo variant, the "727-100C", followed, featuring a stronger floor and a large cargo door, inherited from 707 cargo variants, on the forward left side of the aircraft. The cargo door dimensions were 2.18 x 3.4 meters (7 feet 2 inches x 11 feet 2 inches). The 727-100C was complemented in turn by a "quick change" variant, the "727-100QC", which was broadly the same, but had palletized passenger seating that could be very quickly swapped out. 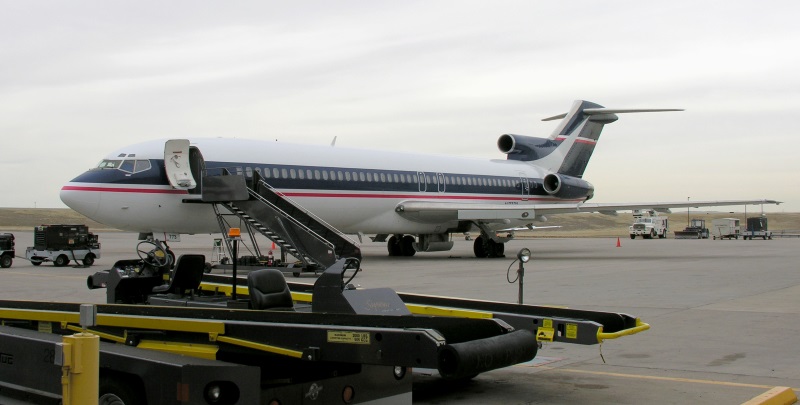 Initial production was in an interim configuration: at the outset, the 727-200 retained the JT8D-7 engines of the 727-100, meaning there was no increase in maximum takeoff weight, and so the bigger passenger load was at the expense of fuel load. That was a conscious trade-off, customer input to Boeing suggesting that the company needed to introduce a larger machine for the short-haul market as soon as possible. However, Boeing soon offered the JT8D-9 as an option, followed by the JT8D-11, with 66.7 kN (6,800 kgp / 15,000 lbf) thrust, permitting higher MTO. 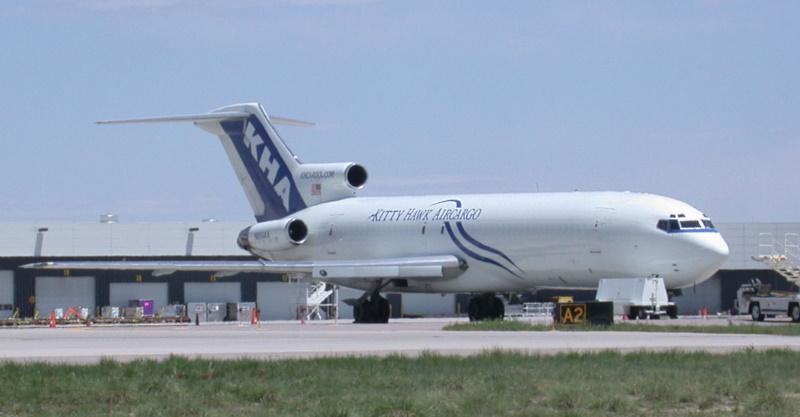 * The 727 served with the vast majority of airlines in the West well into the 1990s, declining in service after that decade as fuel prices rose to the extent to make it uneconomical to fly. A few may still linger in service, some having been refitted with "winglets" -- wingtip vertical fins to reduce wingtip vortex and increase fuel efficiency by a few percent. 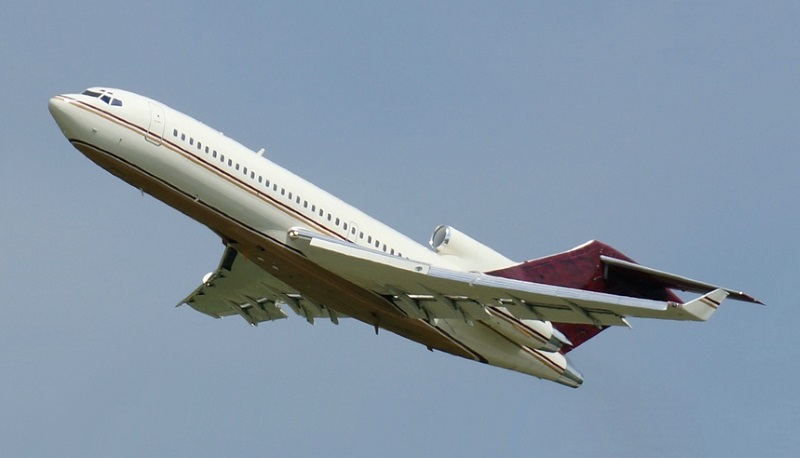 A number of 727s in service were re-engined. In the 1980s, Pratt & Whitney introduced the "JT8D-200" series of turbofans, featuring substantial changes to earlier JT8Ds to provide cleaner, quieter, and more efficient operation. Federal Express updated their fleet of cargo 727s with JT8D-217 engines with 97.9 kN (9,975 kgp / 22,000 lbf) thrust -- or at least partly updated them, only replacing the two side engines and leaving the original old centerline JT8D in place, since it would have been too much trouble to refit.

Fuel consumption was cut by 10% at least; short-field performance and climb rate were substantially improved. Presumably, these machines cruised with the centerline engine at a low thrust setting. Similar JT8D-200 727 retrofits ended up with service with other airlines and in private hands, some refitted with winglets and modernized avionics. The updated engine nacelles appear to be slightly reprofiled from the originals, but it's hard to make out.

Engine retrofits performed by United Parcel Service for their 727-100C/QC cargo fleet were much more easily recognized. UPS refitted their machines with quiet and efficient Rolls-Royce Tay 651-54 turbofans with thrust reversers, swapping out all three engines, resulting in an obviously bulged inlet of the centerline engine that slightly flawed the clean lines of the 727. These machines, which were redesignated "727-100QF" for "Quiet Freighter", also received avionics upgrades, the entire conversion being performed by the Dee Howard firm of San Antonio, Texas. How many upgrades to 727-100QF configuration there were is unclear, numbers cited ranging from 45 to 58, with a private conversion also mentioned. Even with re-engining, the 727 is too expensive to fly in an era of high fuel costs, and the great fleets of the type have been reduced to a handful. 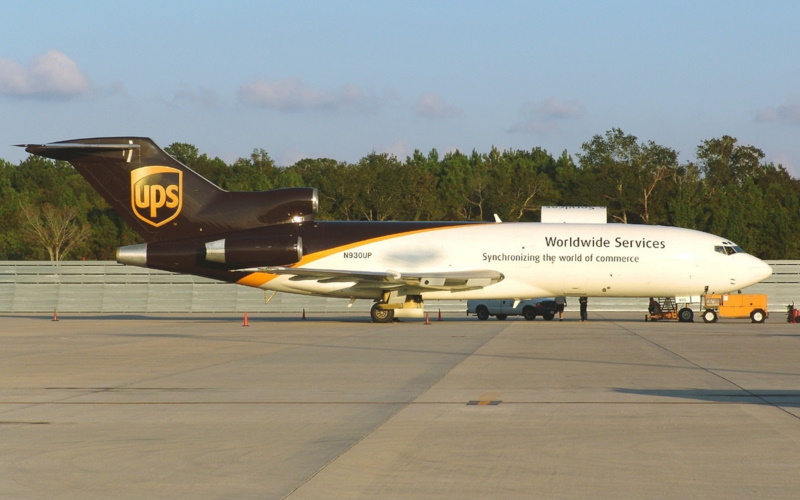 * There doesn't appear to have been any government "special mission" variants of the 727, though some were used as personnel or VIP transports by various nations. Six were operated by the US Air Force, including one 727-100 "C-22A" machine used by Southern Command; four 727-100 "C-22B" machines used by the Air National Guard; and one 727-200 "C-22C" machine, used by Central Command. All these machines were obtained used and were flown as personnel / staff transports; at least some of them were fitted with rearward-facing seats, the military judging that a safer configuration for accident survival. These aircraft are now all out of service. Belgium, Mexico, Panama, New Zealand, and Taiwan also operated the 727 in small numbers in the personnel / staff transport or VIP role.

In the 1980s, General Electric flew a 727-100 on lease from Boeing to test the "propfan" AKA "unducted fan" engine -- something like a halfway house between a turboprop and a turbofan -- with the propfan engine mounted in place of the right JT8D. At last notice, Raytheon operates a 727-200 as a test bed with a "pointy nose", and a widely varying range of other equipment fits, for avionics trials. 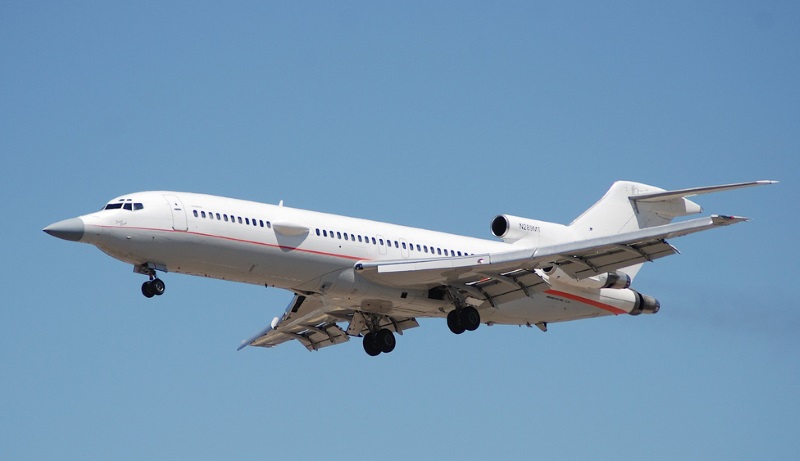 In retirement, 727s have taken on some unusual roles -- for example, as a luxury suite for a Costa Rican hotel in the woods above the beaches, the suite including wood paneling, extensive comforts, and a porch. 727s have also been used for private homes, though some of them have a derelict feel, as if being used as shelter by castaways on an island of the lost.

* I may have flown on a 727 decades ago, but if so I cannot recall it at all. I did take notice of 727s flying around, however, finding their looks intriguing.

Several editions of JANE'S ALL THE WORLD'S AIRCRAFT were consulted as well, and the online Wikipedia also proved useful, in particular for links.